There are a lot of towns named Franklin in the United States, but this one is actually named for Benjamin Franklin. It may be that some or most of the other Franklins are also named for Ben, but one can only read so many Wikipedia entries.

One major claim to fame of the area is the Delaware & Raritan Canal. At 22 miles long it was the busiest and most important canal that most people never heard of and is now the busiest state park and longest bike trail that many people don’t know.

Franklin Township Trivia: In the 1969 movie Hello, Dolly!, Dolly Levi (Barbra Streisand) lies in a scene in which she says that Cornelius Hackl is one of “The Hackls” and that they are actually rich and famous from his family helping to build the Raritan Canal.

Cargo was shipped down from the mines, across river, down to Trenton and up to New Brunswick, where it was ferried across the Raritan Bay to New York, and troops were transported via the canal during the Civil War.

The four seasons are pronounced around Franklin, N.J. The same spring-summer-autumn-winter weather extremes are responsible for the beautiful scenery, particularly the abundant greenery. The extreme conditions of the four seasons are also responsible for concrete damage. Transitions from hot to cold and back again, in addition to the amount of moisture added to the soil from rain and snow are great for causing soil erosion, which can wreak havoc with the support of concrete structures.

Everybody Into the Pool – Or Perhaps Not 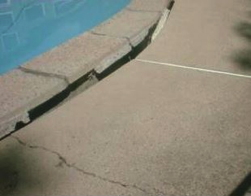 In parts of the country with warm temperatures year round, home swimming pools are not uncommon. You are now in a climate that provides weather warm enough for swimming only about 25% of the year and it’s a rarity – if not a status symbol – to have a home swimming pool.

When you closed down the pool last year, you thought you noticed some sinking of the concrete walkway around the pool. You were hopeful it wouldn’t need repair yet. Sorry to say, the past winter was particularly harsh and was followed by heavy rains in the spring so don’t be too optimistic. Was the deck around the pool that bad last year? Probably not, but at the risk of repeating, it was a tough winter.

You know you need mudjacking, and you need it now!

Time to Call in the Concrete Repair Expert

The Concrete Repair Consultant you have used in the past arrives promptly, as you knew he would. One look at the edge of the pool and you know that he knows you probably should have had that concrete repaired last fall – but there’s no judgement here. It’s time to do what’s necessary. Because this concrete expert has done work for you in the past, you know what to expect. A little Mudjacking to raise the portion of the concrete that has slipped (about 5 inches), followed a bit of smoothing and patching, and the pool edge will look like new.

The man is a concrete artist who works miracles with concrete in need of repair. You’ve seen mudjacking in the past, and it never ceases to fascinate you that injecting some concrete mix under the sinking part of the walkway will pop it back up to the correct height.

It’s now time for the much-awaited call to summer:

“Everybody into the pool!”