Many of the best cities to live in the United States are relatively expensive, and Clifton, NJ is no exception. Clifton’s cost of living is about 28% higher than the national average! However, expensive goods and services in the area are largely offset by high incomes.

A part of the New York City metro area, Clifton residents have easy access to the cultural amenities of the country’s largest city, including easy access to transportation. Clifton has often been used as a backdrop that could be Anytown, USA in TV dramas such as The Sopranos and Donnie Brasco. Clifton has more recently been in headlines as home to the nation’s best hot dog – a distinction not to be taken lightly!

Now, a great hot dog is worth a little effort, if that’s what you’re in the mood for. However, you need to be smart about going out for a hot dog when the snow is deep and the concrete slippery. It’s almost spring, but not quite. 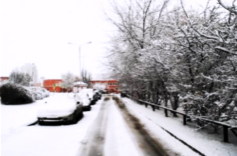 If you must have a hot dog and don’t happen to have a package of Nathan’s All Beef Jumbo Dogs in the fridge, be careful backing out of the driveway. The driveway and side streets near your house have been covered with snow for months. There are bound to be some cracks and bumps that could be dangerous. In fact, as soon as you deal with the hot dog craving, come home and check out the driveway. After all, you did feel a little bump just after you backed out of the garage.

Shovel carefully, then sweep with a push broom. There it is! A crack so large there is a small drop-off. Nuts! Now you need to contact a concrete repair service to deal with the crack. Can a repair be done in cold weather? You have no idea, but the concrete repair expert will know. It’s bound to snow some more and cover the crack again. If you can’t see it, maybe you don’t have to deal with it yet. OK, NOW think like a grown-up. The only thing that can come from leaving a concrete crack unrepaired is a bigger crack, which will be more costly to repair.

Make the phone call to the Concrete Repair Service, and ask for a technician to come out and look at your crack. In all likelihood, a repair using Mudjacking will be effective even if there is still snow on the ground. The concrete repair expert agrees this is possible, as long as the ground is not frozen and the daytime temps are going to get above freezing for the day. He checks the weather forecast and decides that the conditions will be favorable by the end of the week, and you schedule the repair.

Concrete Repair for the Crack

You’ve heard about mudjacking but have never seen it done. The crack looks to you as if it could just be caulked or something. The concrete repair expert you sent for explains that if you want the driveway fixed as cheaply as possible, you can find someone who will just fill the crack. He says he will send you to Home Depot for a calking gun if that’s what you want. He then explains, and is able to show you, that one side of the slab is sinking. You can fix the crack cosmetically and then deal with a bigger problem next year, as the ground under the slab will continue to deteriorate. You can see that he is right.

Your concrete repair consultant arrives later in the week, as scheduled. He is armed with a Mudjacking injector and a large container of concrete. You watch as he drills a few small holes in the sinking side of the driveway crack, and proceeds to insert his injection tool. He explains that the soil under the driveway is much more settled than it appears from the top, creating a pretty large gap between the slab and the earth below. This is why simply caulking the crack would never have served as a permanent solution. The slab would simply have sunk further until there were more – and larger — cracks.

You are satisfied with the repair to your driveway and are confident there will be no more cracks in the near future. You are also confident that you will never again find your refrigerator devoid of hot dogs.